Tom Crowley is quite proud of what he’s been able to build at MBX Systems and the opportunities that lie ahead for his business. But being an entrepreneur wasn’t his first passion.

“I had grown up being a musician, that was my total dream,” Crowley says. “My father always said, ‘You can do whatever the heck you want. But you’re going to finish college first.’ I said that was fine, but I kept playing in bands throughout college.”

When he finished college at Loyola University in 1984, it was time to play. His band, Idle Tears, landed a gig as the opening act for a Fourth of July concert in Washington, D.C. featuring Three Dog Night and the Beach Boys.

“That kind of kicked off that part of my life,” Crowley says. “We ended up moving out to California in 1985 and we started to make a record and do the touring. So my dream early on was to play music full time. But like a million band stories, we made the record, did the tour, it did not succeed and the band broke up. I was not literally on the street, but the band was broken up and I had to go find work.”

The band experience didn’t work out, but it was Crowley’s shot at pursuing his dream. It also connected him to a cousin who just happened to be an entrepreneur.

“He had been doing very well and I got to spend time with him,” Crowley says. “It got me intrigued with the idea of having my own business. I got to work with him and see how he worked and learn what it took to have your own business. I also got to see the rewards, which looked very attractive.”

Crowley may not have realized it, but the future founder and CEO of MBX Systems was on the verge of launching a groundbreaking business around the design and manufacturing of server appliances.

Before he started MBX, Crowley had a couple of other business opportunities come and go in the Chicago area.

When he learned of a small computer components company in Lake County that needed someone to run it, Crowley was game to give entrepreneurship another shot. It was a startup being funded by a friend of Crowley’s, a friend who quickly decided he didn’t want to be involved with it anymore.

“I was very excited about it, saw an opportunity and just took it,” Crowley says. “I ended up purchasing it from him.”

The growth opportunity for the business came out of a change in the way customers purchase software.

“Back in the day, you would buy software that was on a CD,” Crowley says. “That’s where the appliance model came from because it was very difficult for a lot of people to load up software. So they came up with the idea of an appliance where you could have the software on a working server and it’s ready to go.”

Crowley credits Scott Kelly, one of his account managers as well as a top salesperson in his young company, for supplying the motivation to capitalize on this potential.

“He was just a maverick,” Crowley says of Kelly. “Customers would call us and ask for crazy things and he would say yes. Unfortunately, he has since passed away. But back then, he was really pushing us to be open to new opportunities. It turns out there was a big market for this appliance.”

“So we started introducing more services that would take over the entire operation of getting their products to market and to their customers without their customers ever knowing that we were involved,” Crowley says. “So all of a sudden, we became a hardware arm of them. But MBX, our name was nowhere on any of this hardware. It was all their name.”

LET PEOPLE DO THEIR JOB

Crowley says disciplined strategic planning is one of the keys to success in any business endeavor.

“I have an outside business coach who I have been using since 1999 and ever since we started working with him, we continue to grow,” Crowley says. “What that process does is it forces us to look internally and externally on an annual basis in terms of SWOT analysis — strengths, weaknesses, opportunities and threats. We create plans around what we want to do. Then we’re very strong at communicating our plan to the entire company.”

The value of the communication component should not be underestimated. Crowley wants his team to feel the support of management rather than the pressure of his company’s leadership team.

“We have a culture where we foster autonomy,” Crowley says.

“It’s taking the time to find the people who are the right people to work in your company. If you do that and you give them a plan and you let them run, that’s when things really start to happen. What it also does for our executive team, when you have such strong people working your plan, it allows our executive team to work on the business. We can continue to look three to five years out.”

When you set out to hire new employees, you have to put as much effort into it as you would any other aspect of your business. By using an extensive and thorough interviewing process, Crowley is able to uncover the traits that make up an ideal candidate to work at MBX.

“We do our best to make sure the people who work here understand our culture and can work with our value set,” Crowley says. “We have a strong set of values upon which we base how we roll here. Everybody here gets it.”

Even when it’s operating at the peak of its potential, however, you still need to monitor your culture and entry channels to make sure you’re not missing something or slipping in one particular area or another.

“We have a section we do in the annual strategic planning process about brutal facts,” Crowley says.

“It can be facts about anything. It can be facts about the market, facts about employees who work here, just brutal facts. Things that we really have to address. It’s a safe environment to bring these things up. It gives us an opportunity to address some serious issues head on. Some of these issues might be HR related where people aren’t happy or something just is not right. It’s just fostering that open communication which allows managers to find out what’s going on. It’s making people feel like they can come to you with a problem. My door is open, so you can come talk to me.”

As Crowley looks at his leadership style today compared to what it was when he was transitioning from band member to entrepreneur, he finds that he is a lot more patient today.

“I think I listen better,” Crowley says. “I’m continuously grateful. I try to bring a positive attitude when I walk into the place. I let people know that I care for them. Sometimes, it’s difficult because there are a lot of the balls in the air. But I try to make sure I make time for the people here and try to listen to them as best I can to what they have to say.”

In addition to the changes in his own life and leadership career, the business and the challenges it faces have evolved as well. The economic downturns of both 2000 and 2009 could have been significant obstacles to continued growth.

“Fortunately, we still kept growing through that time and I had no layoffs in either of those downturns,” Crowley says. “We had a big hard drive crisis in 2010 where a tsunami wiped out a hard drive plant in Singapore. That was a major crisis here. But I had a great supply chain and a great bank behind us and we were able to do what we needed to do to get through that.”

One truth that most successful leaders take to heart early in their careers is that you will not be the answer, or the provider of an answer to every problem your company faces.

“Sometimes people tell you stuff where you want to think you know it all,” Crowley says.

“I don’t know it all. So it’s being humble enough to say, ‘Yeah, you’re right. I should have done it that way.’ Admit your mistake, learn from it and move on. Man, have I made a ton of mistakes. It’s just remaining humble and open to people who ultimately really care about you.”

Fortunately, the mistakes are few and far between these days. MBX continues to grow its revenue, the company has more than 130 employees and Crowley says he’s bullish on the future.

“Three verticals right now that we are focusing on are security, storage and video with a concentration on what’s called GPU, or graphics processing units,” Crowley says. “You’ve heard of all the breaches in security that happen all the time. So projected investment in security, it’s total investment — some is software and some is hardware — but it still has a very strong trajectory to it.”

In the meantime, the former member of Idle Tears can take pleasure in the person who sits right outside his office.

“My daughter works here now,” Crowley says. “When I started she was a little tiny kid and now she’s in a cube right outside my office. That is a thrill.” ● 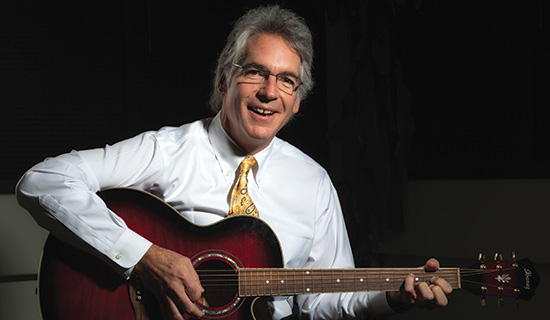 Crowley on his life: Being grateful every day is something that I am and continue to be. I drive up to my office now and I just can’t believe where I’ve come. Just keeping that awe about what you can create and what is possible and having fun. You have to have some fun with it and working with people you like can really help. Be a team member and understand your vision. Having a very strong marriage has really been the foundation of all this. My wife is much smarter than I am. I’m blessed to have her. I also have two kids, a son and a daughter and I have a strong faith as well. That is something upon which you can gain a lot of strength.

Crowley on the future: You can imagine the amount of data that is produced on a daily basis. Right now it’s boggling, the projections into the latter half of the decade are just staggering. That has to go somewhere. The proliferation of video and video applications, as you can imagine that as well. As bandwidth has opened up and video is more accessible and faster, that’s growing. So we see a lot of opportunity for us in the future.